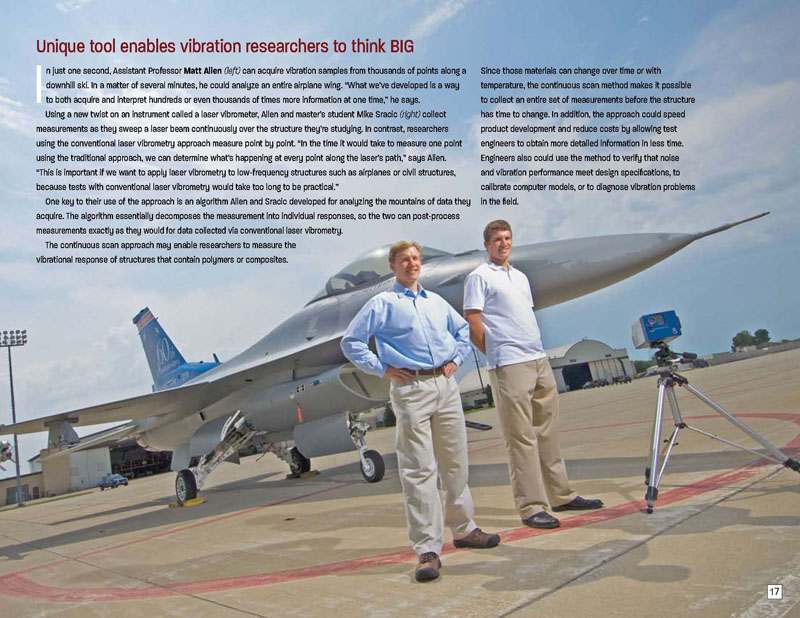 Follow this link to see a video of a CSLDV test on a downhill ski: (Low Resolution 18 MB), (High Resolution 68 MB)

In just one second, Assistant Professor Matt Allen can acquire vibration samples from thousands of points along a downhill ski. In a matter of several minutes, he could analyze an entire airplane wing. “What we’ve developed is a way to both acquire and interpret hundreds, or even thousands, of times more information at one time,” he says.

Using new twist on an instrument called a laser vibrometer, Allen and master’s student Mike Sracic collect measurements as they sweep a laser beam continuously over the structure they’re studying. In contrast, researchers using the conventional laser vibrometry approach measure point by point. “In the time it would take to measure one point using the traditional approach, we can determine what’s happening at every point along the laser’s path,” says Allen. “This is important if we want to apply laser vibrometry to low-frequency structures such as airplanes or civil structures, because tests with conventional laser vibrometry would take too long to be practical.”  One key to their approach is an algorithm that they have developed that allows them analyze the complicated continuous-scan laser measurements using conventional analysis software.

The continuous-scan approach may enable researchers to measure the vibrational response of structures, such as those that contain polymers or composites. Since those materials can change over time or with temperature, the continuous scan method makes it possible to collect an entire sent of measurements before the structure has time to change. In addition, the approach could speed product development and reduce costs by allowing test engineers to obtain more detailed information in less time. Engineers also could use the method to verify that noise and vibration performance meet design specifications, to calibrate computer models, or to diagnose vibration problems in the field.  (Photo and story above courtesy of the College of Engineering Annual Report.)

Click here to see slides from a presentation on continuous-scan laser vibrometery.